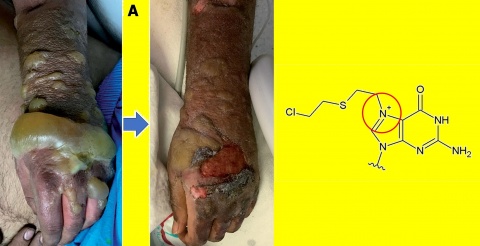 Figure 1: Pathomechanism of SM: Blister formation occurs time- and concentration-dependent after SM exposure resulting in chronic wound healing disorders (A, adapted from [2]). SM forms a sulfonium ion which alkylates DNA bases, for example at the N7 position (red circle) of guanine (B).
Introduction

Chronic wound healing disorder is a major problem after sulfur mustard (SM) exposure. Bone marrow derived mesenchymal stem cells (MSC) might be involved in this process because of their essential role in wound healing 1. We hypothesize that SM urges MSC to undergo chronic senescence. As a result, they may persist over long time periods and secrete proinflammatory cytokines known as the senescence-associated secretory phenotype (SASP). In this study, we analyzed whether SM is able to induce senescence in MSC and if already described senolytic drugs selectively eliminate these senescent cells. 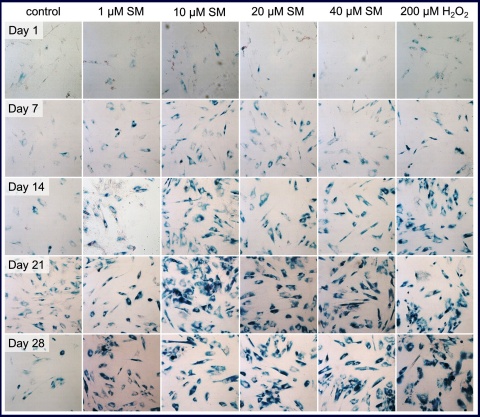 Figure 2: Time- and concentration dependence of senescence induction. Senescent cells were stained blue by SA-β-gal staining and all cells were counterstained with nuclear fast red.
Methods

Human MSC were isolated from bone marrow of femoral heads and the isolation efficiency was confirmed by cell surface markers via flow cytometry[1]. MSC were -exposed to single doses of SM (1-40 µM) or H2O2 (200 µM) and senescence-associated β-galactosidase (SA-β-gal) was stained. Clonogenicity was determined by crystal violet staining and migration by IncuCyte microscope. Senescent and non-senescent MSC were treated with seno-lytics and cell survival was assessed by XTT assay.

Senescent MSC were visible by SA-β-gal staining -(Figure 2) 7 days after single dose SM treatment in this assay and the number of senescent cells as well as the intensity of the staining increased until day 14. At this time, about 100 % of all cells were senescent at the higher SM concentrations tested (10, 20 and 40 µM).

Prolonged incubation of these cells did not result in any obvious changes in senescent state up to day 28 for those cells. In contrast, 1 µM SM treatment seemed to be less effective because there were many non-senescent cells visible. MSC treated with the positive control H2O2 also showed a sustained senescence.

The drugs antimycin A, etomoxir, dasatinib, quercetin (see figure 3), ABT-263, ABT-737, FOXO4-DRI, and  17-DMAG, which were already shown to be senolytic, did not reduce the survival of SM-induced senescent cells significantly, when compared to non-senescent MSC. 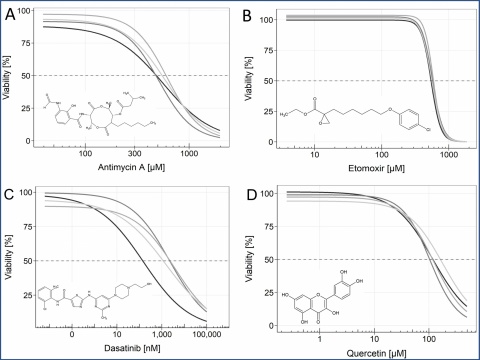 Figure 3: Selective removal with senolytic drugs (examples): The cell survival after treatment with antimycin A (A), etomoxir (B), dasatinib (C) and quercetin (D) was assessed with the XTT assay.
Conclusions

SM single dose exposure is sufficient to induce chronic senescence in human MSC. These SM-induced senescent MSC may be unable to fulfill their regenerative role and contribute to the wound healing disorder. Selective removal of these cells might improve wound healing. The tested senolytic drugs are not adequate therapeutic candidates in SM poisoning. This may be due to the variability between senescence inducers and cell types used in other studies. Further research is necessary to identify other mechanisms to selectively remove senescent cells which would be an innovative treatment strategy after SM exposure.

The poster was awarded the 2. price of the 17. MCDC poster competition.

1   Isolation of MSC: Bone marrow was scraped from femoral heads and resuspended in medium. Cells were separated using a 70 µm cell strainer. Ficoll® was overlaid with the cell suspension and separation was obtained by density gradient centrifugation, after which MSCs are enriched in the interphase. Finally, cells were plated and grown on cell culture dishes.

„Because Every Test Is a Life”