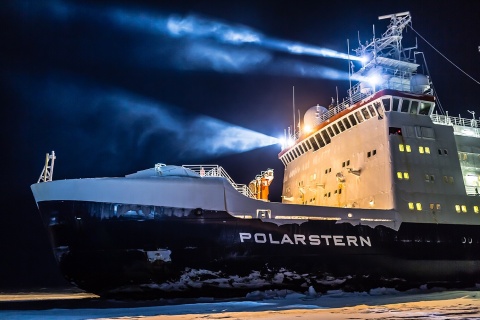 For one year, she will be the centre of the largest Arctic research expedition ever, spending a full annual cycle trapped in the massive Arctic ice: the Research Vessel Polarstern, flagship of Alfred Wegener Institute and icon of German as well as international Polar Research.

Originally commissioned in 1982, the Polarstern is, to this day, still one of the most advanced and versatile polar research ships worldwide. Between 1999 and 2001, the ship was completely overhauled and now carries the latest equipment and technologies available. This is why she usually operates 317 days on average every year. Covering about 50,000 nautical miles per year, Polarstern carries out scientific research as well as resupplies the research stations run by the Alfred Wegener Institute - such as the Neumayer Station III, an Antarctic base manned year-round. Until 2019, Polarstern has logged more than 1.7 million nautical miles, which equates to roughly 3.2 million kilometres.

The Polarstern and MOSAiC

Even for the reliable Polarstern and her highly experienced crew, the MOSAiC expedition poses quite a challenge. Only thanks to her special technical details, this ship can be the centre of an expedition with the dimensions of MOSAiC. Not only is Polarstern capable of operating in the pack-ice zone, but owing to her double-walled steel hull and 20,000 horsepower, she can also easily break through 1.5-metre-thick ice and overcome thicker ice by ramming. Being equipped for sustained operations at temperatures like in the Arctic winter, down to -50 degrees Celsius, Polarstern is also capable of staying the winter in the ice of the polar seas. 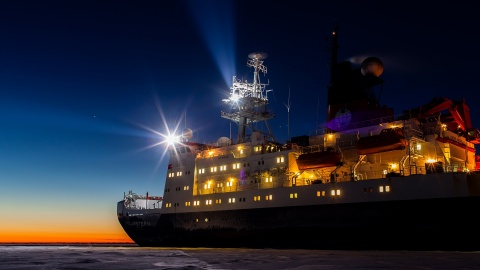 However, it’s not nearly so cold inside the ship, where the about 100 MOSAiC researchers, technicians and crew members work and live. In the various scientific labs, the international experts conduct research across the 5 main areas of interest ( atmosphere, ocean, sea ice, ecosystem, biogeochemistry). For MOSAiC, this set-up will be complemented with specific scientific equipment, instruments and lab containers, and even a special additional crane has been installed.

In addition, Polarstern has various vehicles (helicopters, snowmobiles, Pistenbullies, etc.) on board, allowing the researchers to take measurements and gather data not only in the central observatory but also in the distant Distributed Network. The cutting-edge onboard computer system ensures that all scientific data are regularly recorded, saved and forwarded