Figure 1: Mode of action of the targeted scavengers that involves an initial binding step and a subsequent chemical reaction with the bound NOP.
Background and Motivation

Among the neurotoxic organophosphates (NOPs) that were developed as chemical warfare agents, VX and related derivatives are the most persistent and toxic compounds. A promising strategy to treat nerve agent poisonings relies on the administration of a scavenger that detoxifies the NOP before it can exert its toxic effects [1]. Our approach to develop such scavengers involves the use of macrocycles with a nucleophilic group that can bind and subsequently deactivate V-type nerve agents.

The required aminocalix[4]arene precursor was synthesized in a 6-step reaction from the commercial tert-butyl-calix[4]arene. The last step of the synthesis is the coupling of this aminocalixarene with different car-boxylic acids bearing also protected hydroxamic acid groups. In this way, several scavengers could be obtained.

Figure 3: Dissociation constants of the complexes between inactive calixarene derivative Me-1 and VX and between calixarene tetrasulfonate SC4A and DIPEA hydrochloride that was used as a surrogate for VX.

Figure 2: The starting material (left) was converted in a multi-step synthesis to yield a calixarene derivative (right) containing a nucleophilic group X connected to the macrocyclic scaffold via an amide.

Binding studies performed in Munich showed that the protected hydroxamic acid Me-1 binds to VX with an affinity of 77.6 µM.

According to binding studies performed in Kaiserslautern, the tetrasulfonatocalix[4]arene binds with the DIPEA hydrochloride with a dissociation constant of 3.2 µM. The respective ammonium salt was used as an analogue of VX. Thus, the reduction of the number of sulfonate groups around the calixarene ring, associated with the introduction of the hydroxamic acid, reduces the cation affinity of the calixarene.

The rates of the detoxification of V-type nerve agents, mediated by six different calixarene derivatives 1-6, were determined in TRIS-HCl buffer (0.1 M, pH = 7.4) at 37 °C by using an in vitro enzymatic assay. The obtained half-lives of detoxification are summarized in Table 1. 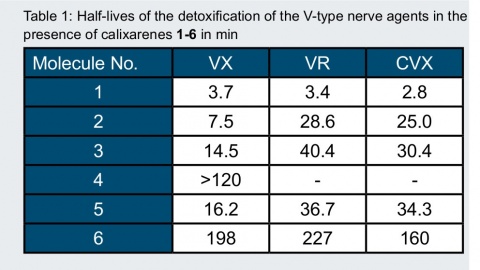 Beside our best scavenger 1 [2], which detoxifies VX at pH 7.4 and 37 °C with a half-life of approximately 3 min, several structurally related calixarene-based scavengers were synthesized. The replacement of the heterocyclic unit in 1 with acyclic hydroxamic acids leads to a drop of activity. Cyclic N-alkylated hydroxamic acids show a surprisingly large activity, which is, however, still lower than that of scavenger 1.

This research was supported by contracts with the Bundeswehr (E/UR2W/CF511/9A803, E/U2AD/GD008/GF565). We also thank Ms. Madlen Baumann (Bundeswehr Institute of Pharmacology and Toxicology, Munich) for half-life measurements.

The poster was awarded the 3. price of the 17. MCDC poster competition.