Figure 1: Overview of the test setup: (1) CULTEX® RFS (exposure module containing the cell culture inserts); (2) eFlow® rapid nebulizer system consisting of (a) the control unit and (b) the nebulizer; (3) activated carbon filters and (4) sodium hypochlorite as decontamination units; (5) chemical warning device LCD3.3
Sulfur mustard (SM) is a highly toxic chemical warfare agent that has been repeatedly used in current conflicts (e.g. Syria 2015) despite being banned by the Chemical Weapons Convention (CWC) since 1997. Severe acute and long-term dysfunctions and health effects can be observed after contact with liquid, vaporous or nebulized SM. In particular, the respiratory effects are extremely challenging from a medical perspective.

As human exposure data are limited and translation of animal data to humans are difficult or even flawed due to critical differences (e.g. respiratory physiology and anatomy), recent research has focused on suitable in vitro exposure methods that represent a valuable alternative for explorative toxicological in vivo studies. Most exposure systems are thereby exposing cells under submerged conditions where the test substances are dissolved or suspended directly in the cell culture medium covering the cells. Such approaches may be flawed because they can affect and alter the physico-chemical properties of a compound and thus, the toxic properties of a test substance. Air-liquid interface (ALI) in vitro inhalation models, however, mimic the human exposure at a cellular level with higher biological and physiological similarity than submerged exposure experiments. So far, it is unclear, whether the enhanced experimental complexity of ALI exposure is superior to submerged exposures. Moreover, aerosolization of SM represents a -major challenge to scientists due to the extreme toxicity of SM, the safety precautions to be observed and the -homogenous distribution of the SM aerosol.

Aim of our study was the establishment, validation and application of an appropriate in vitro exposure system that meets all necessary safety requirements for the exposure of cultivated human lung cells to nebulized SM aerosols at the ALI. Furthermore, we analyzed whether exposing cells at the ALI is feasible and favorable compared to the classic submerse SM exposure. 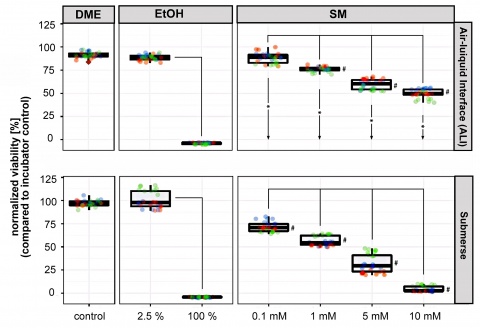 Viability of cells after ALI and submerse SM exposure

A549 cells were exposed to SM under submerged or ALI conditions. Exposure times and SM concentrations were kept identical between both exposure routes in order to compare the two experimental approaches. Exposure of cells to SM resulted in a dose-dependent decrease of cell viability. The cytotoxicity in ALI experiments was significantly lower compared to the submerged exposures at comparable SM concentrations (see Figure 2). 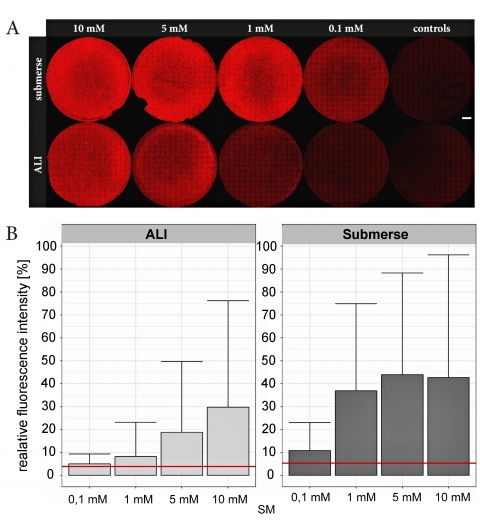 The fluorescence intensities of DNA-adducts were densitometrically evaluated by laser scanning microscopy. A concentration-dependent increase of the relative flu-orescence intensity after SM exposure was observed in both exposure groups, but was significantly higher in submerged exposed cells (see Figure 3B).

Horizontal lines in Figure 2B indicate background fluorescence levels, error bars represent standard deviations. The high standard deviation does not interfere with the homogeneity of the DNA-adducts. This is due to a distinct variation of fluorescence intensities because cell confluency was below 100 % and 2F8 staining was located in the nuclei.

SM-induced DNA alkylation was analyzed as a marker for cell damage by μLC-ESI MS/HR MS-based detection of HETE-Ade and HETE-Gua DNA-adducts. In line with the viability data and the immunocytochemical staining, increasing SM concentrations led to increasing amounts of DNA-adducts (HETE-Ade and HETE-Gua). Comparing the amount of DNA alkylation per 1x106 base pairs between ALI-exposed and submerse-exposed cells revealed a distinct higher DNA damage in submerged exposed cells (see Figure 4). 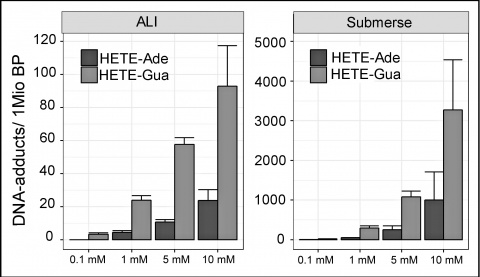 Our results present the first in vitro exposure of cultivated human lung cells to nebulized SM aerosols under ALI conditions. We proved the safe applicability of our
ALI exposure system, and the reproducible and stable generation and homogenous distribution of the nebulized SM aerosol. Clear dose-response relationships can be derived. Lower doses of SM reached the cells during ALI exposure in our setup compared to the submerged -exposure but were sufficient to cause cytotoxicity and DNA-adduct formation. Our exposure system represents a scenario which is closer to the physiological conditions after an in vivo exposure to the agent compared to the in vitro submerged exposure.

The poster was awarded the 1. price of the 17. MCDC poster competition.