General and oral health play a particularly important role in the ranks of the Macedonian Armed Forces. Only healthy members of the Army are able to perform daily professional tasks. Problems of a dental or periodontal nature are often the cause of limited ability to engage army personnel, at home and in missions.

During the mission in Iraq, according to the US Army, in the period 2000–2003, dental interventions related to the gingiva and periodontium ranged from 2.8 % to 9.6 %.

Periodontal disease is defined as an inflammatory disease of the supporting tissues of the teeth caused by specific microorganisms or groups of specific microorganisms, resulting in progressive destruction of the periodontal ligament and alveolar bone leading to the formation of periodontal pocket or gingival recession or both. The clinical form and progression of periodontal disease are related to the microbiological burden of the biofilm, host susceptibility, and modified environmental and behavioral factors. Among the modified factors besides smoking, there is evidence to suggest a link between periodontal status and diet, alcohol use, socioeconomic status, and stress levels, although these relationships are not clearly established. The susceptibility of the host to the occurrence and development of various clinical forms of periodontal disease is the subject of numerous scientific studies that confirm the hereditary factor in the body’s immune response to the causes of the disease.

A lot of evidence in the literature shows the direct and indirect impact of periodontal pathogens on overall health. This correlation occurs in cardiovascular diseases, Diabetes mellitus, Alzheimer’s disease, oral cancer, etc. Hence the importance for timely diagnosis and treatment of periodontal disease, as well as the implementing preventive measures for members of the Macedonian Armed Forces.

The military service is specific and has major challenges, including stress which is one of the risk factors associated with the development of periodontal disease.

Among the many challenges in the daily work of the professional staff of the Army are the field engagements, which include performing work tasks in different conditions, on training grounds, with 24/7 engagement in shifts, with exposure to different climatic circumstances and increased physical and psychological effort. Field assignments often alter the normal day-to-night routine of staff, including sleep, diet, and oral hygiene. Regular and proper oral hygiene is the first important measure in preventing periodontal disease and maintaining it in remission after diagnosis and appropriate therapy. Field activities are often an excuse for irregular preventive visits to the dentist. Such examinations are crucial in the prevention, early diagnosis and timely treatment of periodontal disease. Performing work tasks under different circumstances, with prolonged working hours results in a significantly higher rate of periodontal disease than in other categories of workers.

The purpose of this paper is to determine the condition of the periodontium in some of the professional army personnel and to determine whether there is an impact of field engagement on the risk factors for periodontal disease.

This research included 300 members of the Macedonian Armed Forces, aged 20 to 40, from both sexes, without chronic diseases and came from units that are field engaged and units that are not field engaged. The research was conducted with the prior approval of the Chief of General Staff, at the „Ilinden Barracks” Skopje. A survey questionnaire was created to be filled out by the dentist as the surveyed army members answered.

For this purpose, the Community Periodontal Index of Treatment Need (CPITN) was used, as an index recommended by the World Health Organization (WHO), to determine the condition of the periodontium and the need for therapy. The examinations were performed with a periodontal graduated probe with a rounded tip and a dental mirror in a dental office under artificial light. They were performed by the same dentist from July to December 2020.

Chi-square independence test was used for statistical processing of the data, because the data are of qualitative data (categorical data), and the statistical significance was set at p < 0.05.

According to the answers of survey questionnaire we got the results in Table no. 1:

More than 60 % of the respondents from the first three CPITN groups are often engaged in the field, while the members of the CPITN 4 group are 100 %.

After the statistical analysis performed with Chi-square independence test (X₂) on the data on the impact of field engagement on the risk factors for periodontal disease, the following results were obtained (Table no. 2).

Field-engaged and field-no engaged professional Army personnel do not have a significant difference in how often they brush their teeth.

There is a significant difference that is registered with the use of interdental brushes as an additional means of maintaining oral hygiene between field-engaged and field-no engaged respondents. 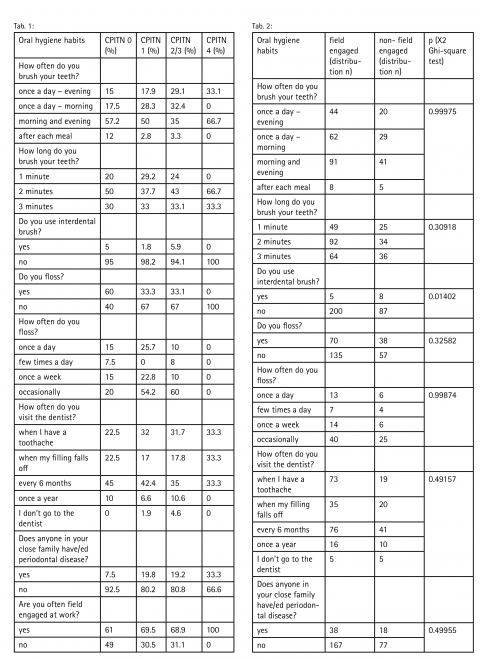 In this study, 13.6 % of the respondents did not need therapeutic treatment; they had a healthy periodontium, which is a better result than some similar studies in other armies.

According to the results of the Spanish Army, 7.5 % of the same age group had a healthy periodontium in all sextants according to the CPITN index, while according to the results of the research in the Israeli Defense Forces, only 1.19 % of the same age group had a healthy periodontium. Gingival bleeding was recorded during probing at 35 % of the members of the Macedonian Armed Forces in this study without the presence of tartar and iatrogenic factors; training and motivation were required to maintain oral hygiene. According to similar research in the Spanish Army 10.1 % of respondents had recorded gingival bleeding, in the Serbian Army 4 % and in the US Army 37 %. At the Croatian Armed Forces 81 % of the surveyed professional staff have gingival bleeding. As many as 50.3 % of our respondents were categorized in the group CPITN 2/3 according to the needs of therapy, which requires training for proper oral hygiene, removal of solid sub and supra gingival deposits, correction of iatrogenic factors and processing of periodontal pockets that are with a depth of up to 5.5 mm. Among the members of the Spanish Army, 82 % of the respondents needed removal of the sub and supra-gingival solid deposits and processing of the periodontal pockets, while in the Serbian Army 46 % of the respondents at that age.

According to our study, 1 % of the respondents need complex therapeutic procedures, including surgical ones, while in the Spanish Army 4.5 % and in the Serbian Army as much as 12 % of the surveyed army personnel aged 20 to 40 years. Regarding the oral hygiene habits of our respondents the largest percentage, 43 % have a habit of brushing their teeth twice a day (morning and evening), while according to a study in Japan 77 % of respondents aged 20 to 24 years have the same habit. According to the results of the survey in the Croatian Armed Forces, 43.9 % of the professional staff have a habit of brushing their teeth twice a day. The use of interdental brushes among members of the Macedonian Armed Forces is at a very low level, only 3.7 %, while 81.2 % of respondents in the Serbian Army said they do not use interdental brushes, which is also low percentage.

In 39 % of the patients we found that they visit the dentist twice a year. According to the data from the study in the Serbian Army 55.4 % of the respondents perform regular annual examinations at the dentist, in the Croatian Armed Forces 22.5 % of the professional staff visit the dentist every six months, and 55 % once a year. In Japan, 36.7 % of respondents at that age visit a dentist every three months. Among the members of the Israeli Defense Forces, 55 % visit the dentist once a year. Based on the results compared with the results published by studies similar to ours from the regional armed forces, it can be concluded that the state of periodontal health and oral hygiene habits are similar.

Regarding the data obtained from the differences in oral hygiene habits between field-engaged and non-field engaged military personnel, we found that they are not significant, except in the use of interdental brushes. However, it must be noted that generally very few respondents from both groups use interdental brushes and the interpretation of the results should be cautious. Regarding the other questions, the results obtained were expected.

It can be concluded that the practical benefits of determining periodontal health status and therapy needs in the armed forces help to see the readiness of the forces to perform daily tasks in terms of periodontal health on the one hand, but also provide information for calculation the necessary time, resources and qualitative and quantitative preparations for the implementation of the necessary therapeutic procedures.

Of course, efforts should be made to raise awareness of the importance of oral hygiene, its proper and regular implementation regardless of the circumstances, regular visits to the dentist and all preventive measures that lead to more successful management of periodontal disease. An additional benefit of such an approach would be the greater professional commitment of the army personnel.

Literature available from the author.